Which governments do Open Data well?

Photo by Kyle Glenn on Unsplash

In the last decade, we have seen open data policies geared at making open data transparent, accessible and available to the public. Today, we are seeing improved access to open data across the globe, giving organisations opportunities to innovate and solve problems. We can track our public transport in real time, find out which car park has available spots, and know more about our greenhouse gas emissions. Fostering open data is not only the key to continual innovation, but also to improve public trust and the lives of everyday citizens.

Which countries are doing this well?

Different countries are at different stages in terms of open data transparency, innovation, and social impact. There are a few indexes measuring and comparing open data government. Measurement indicators vary between indexes, but the principles are the same – comparing nations on public datasets made available such as government budget and expenditure, land ownership and health sector performance based on openness, community involvement, inclusiveness, accessibility and usability. For this blog post, we will use the Open Data Barometer as our source.
Below is a comparison of countries out of a score of 100 (only the top 10 have been captured) on the following indicators: 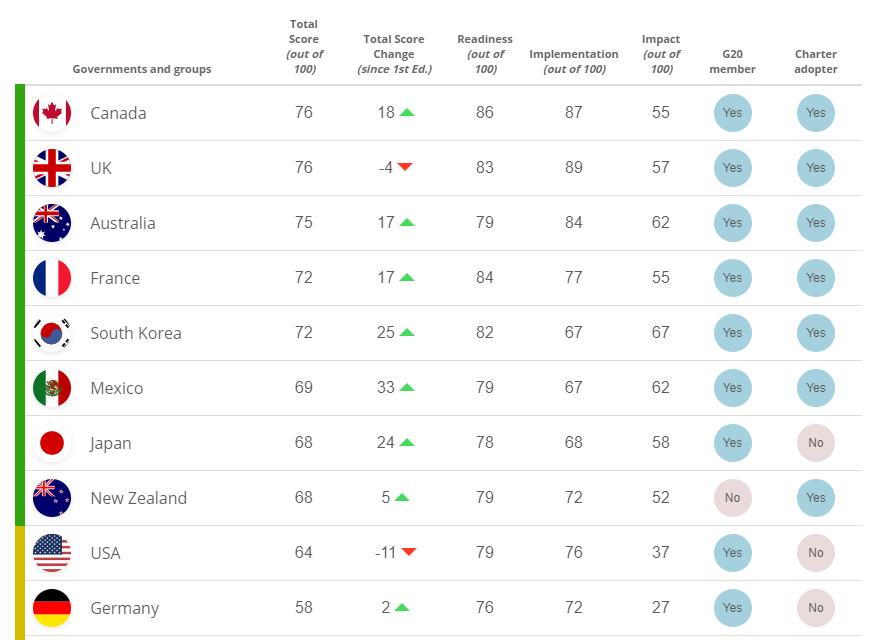 It’s encouraging to see Australia as one of the leading nations in Open Data. Outside of Australia, Canada, South Korea, Mexico and Japan have made strides in improving access to open data. Canada has committed to “open by default” and launched the Open by Default Pilot in 2017 in which four government departments proactively released working documents to the public. They also launched the Aboriginal Community Data Initiative to provide these groups with important data for planning and understanding the demographics of their community and the population in surrounding areas.

South Korea’s public institutions have also proactively released official records without request for public viewing. The government also encouraged the unemployed youth to establish ‘open data startups’, which resulted in great innovative projects. According to the Open Data Barometer, the indicators for civil society engagement, which means support for innovation and open data activity, have doubled since their first assessment in 2013.

Mexico’s Mejora tu Escuela (Improve your School) education initiative is an online platform that provides information about school performance to citizens and aims to support parents. It allows users to compare thousands of datasets to improve educational decision-making and to demand better education for their children. It has had a positive impact on parents’ decision-making, and has also helped to deliver greater accountability and reduce corruption in the educational system.

Japan had several initiatives implemented written in their Declaration to Be the World’s Most Advanced IT Nation strategy paper. Examples include promoting radical business process re-engineering to break down barriers between administrative areas within government and enhancing agricultural crops by using environmental and breeding data. They have also set up an open data site with thousands of data points on barrier-free facilities, such as train stations, to assist pedestrians with disabilities and for the elderly.

How do we keep Open Data an important agenda for Government?

There is significant room for improvement and sizeable actions governments can take to ensure Open Data is first and foremost on their agenda:

Governments everywhere have achieved a lot in the last decade, but there’s a lot of work ahead to build and embed strong open data governance practices. We need to cultivate open data culture that will allow us to truly realise the promise and impact of open data.

For more information, you can read the GIPA Act for Australia, as well as our Transport Open Data Policy.

Have a data request? Tell us what you need on our Open Data Request page.